Since I hadn’t glued the blocks into rings the night before I did it after lunch on the 20th.  I have found that it saves time to apply glue to 6 blocks at a time. 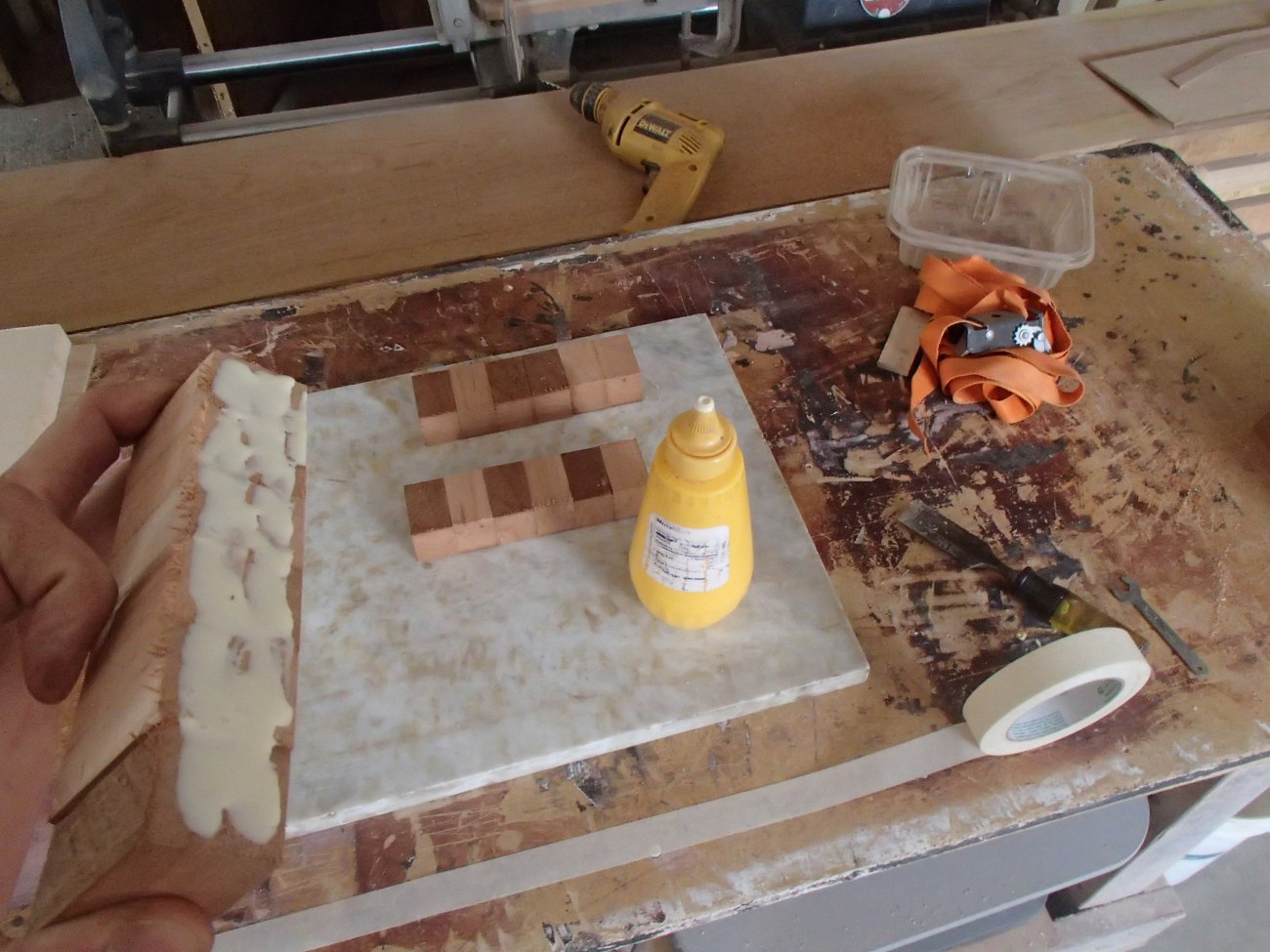 Then I stand them all on their non-gluey ends and start sticking them down on the piece of masking tape that I have unrolled sticky side up on the table.  This must be done fairly rapidly so that the glue doesn’t have time to run down off the ends of the blocks onto the table.

Then I tear the tape off at the 18th block, grab the two end blocks and bring them together at the top of the circle.  This bit of the job is an illustration of the maxim “He who hesitates is lost” because if I don’t keep moving upward with the end blocks other ones will start to fall off the tape and the whole thing falls apart.  As long as it’s done quickly it’s quite easy.  Then I lay the ring on its side on the old stone slab and put the band clamp around it.  I keep each band clamp in its own container with a little piece of scrap wood from when I used to make 12 sided rims which I put under the clamp shoe so that the clamp doesn’t push the block under the ratchet out of line.  I tighten the clamp and then hit each joint with a mallet to drive them all flat against the stone and make the ring as even as possible.

Once the ring is as flat as possible I hang it up to dry, with the tail end of the band clamp out of the way so glue doesn’t drip on it.  This process is takes longer to describe than to perform, with each ring taking about 5 minutes or a bit less to assemble.

In the evening I worked for about two hours, mostly on the neck.  First I took it out to the loft and ran it over the jointer a few times to make a nice flat surface on the fretboard plane.

Then I brought it back inside and sanded the fretboard surface flat on the 12″ disk sander on the end of the Shopsmith.  I don’t usually have this pile of wood between the Shopsmith and the rolling table, but it’s acclimating for a few weeks prior to being made into a dining able and a countertop.  The rest of the mess in the shop is typical for me.

Then I made some measurements and cut off about an extra 1/8″ from the back of the neck on the bandsaw.  I like to have a little extra wood so that if I have to take more off on the jointer than I had planned it doesn’t come out too thin.  Sometimes wood will move a bit as tension releases when a board is cut, but this wood seemed very stable.

Then I got out the big ruler which I mainly keep for necks and other jobs where I need a really straight line, and laid out the neck shape on the fretboard surface.  I usually build necks so that the center line of the blank is the 3rd string path, unless I am using a contrasting stripe.  The line to the treble side of the neck from the 3rd string path is the truss rod line.  The rest of it is just the outline of what is to be cut.

The next stop is the bench with the woodworkers vise.  I put a straight board in the vise to act as a fence and then clamp the neck to the bench so that the truss rod line is 3″ from the fence.

Then I plunge the router bit into the neck at the nut and make a single full-depth pass to the heel.  I have to cut from right to left when the fence is on my side of the workpiece because that way the rotation of the bit pulls the router to the fence.  If I started the cut at the heel it would pull the router away and the cut would be wavy. 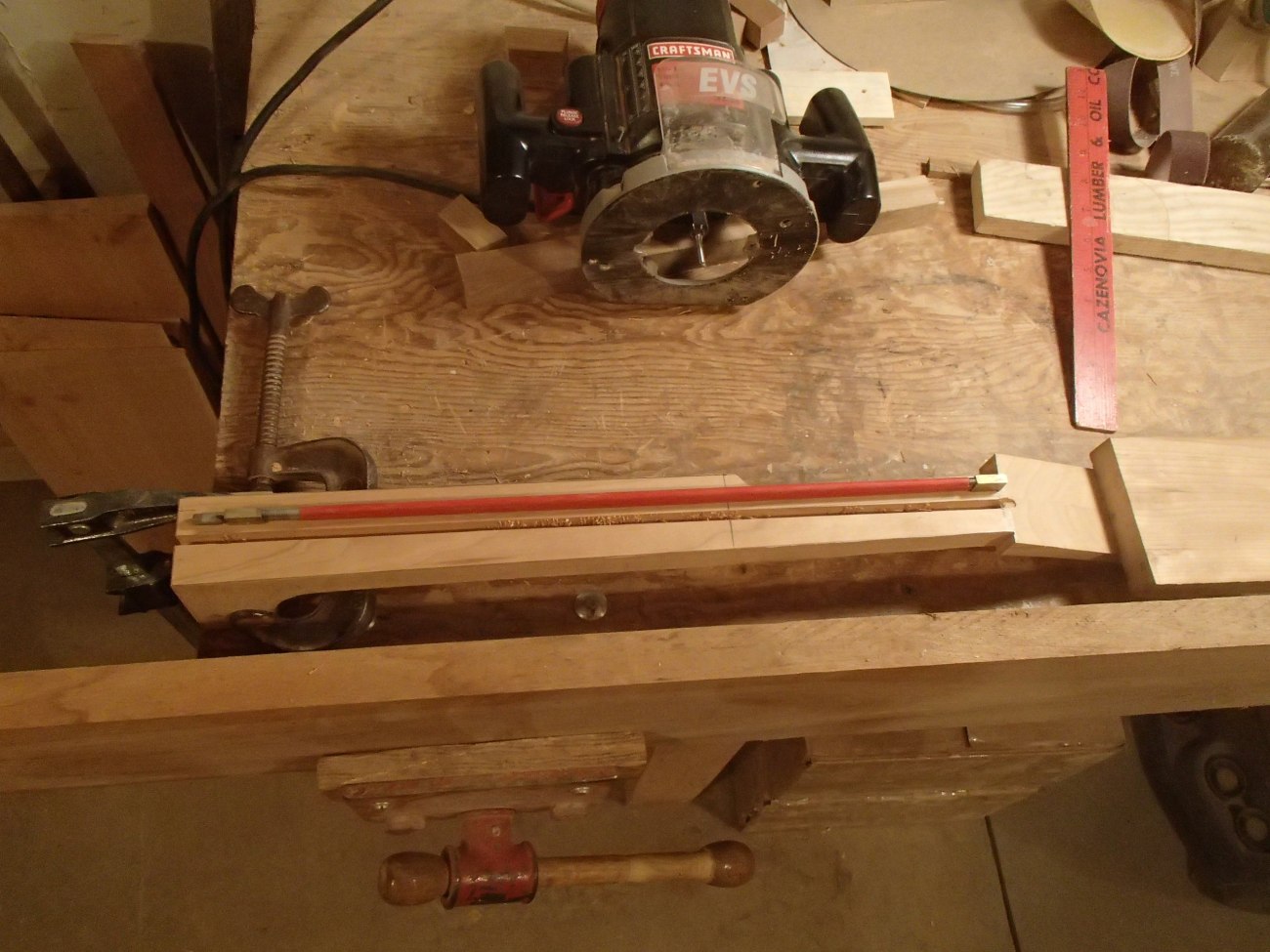 Then I tilted the bandsaw table and made a cut on each side of the heel and along the neck, removing a bit of the corner.  I just eyeball this, there are no marks needed.

Then I drilled a 5/16″ hole for the adjustment barrel on the end of the truss rod and put the neck into the fixture for cutting the heel on the spindle sander.  It’s a pretty self-explanatory design, the cams are adjustable for different neck widths.  I got the idea from Rudy on BHO, whose website bluestemstrings.com was a big help to me.

Then I took the neck back to the woodworker’s vise and used the router to cut the tension hoop ledge.  I followed the curve I had just made on the spindle sander.

Then I glued the peghead ear onto the neck.  I only need one, and I got it from the piece of the neck that I cut away from the area where the 5th string isn’t, just below the peghead.  That way the color will at least match. 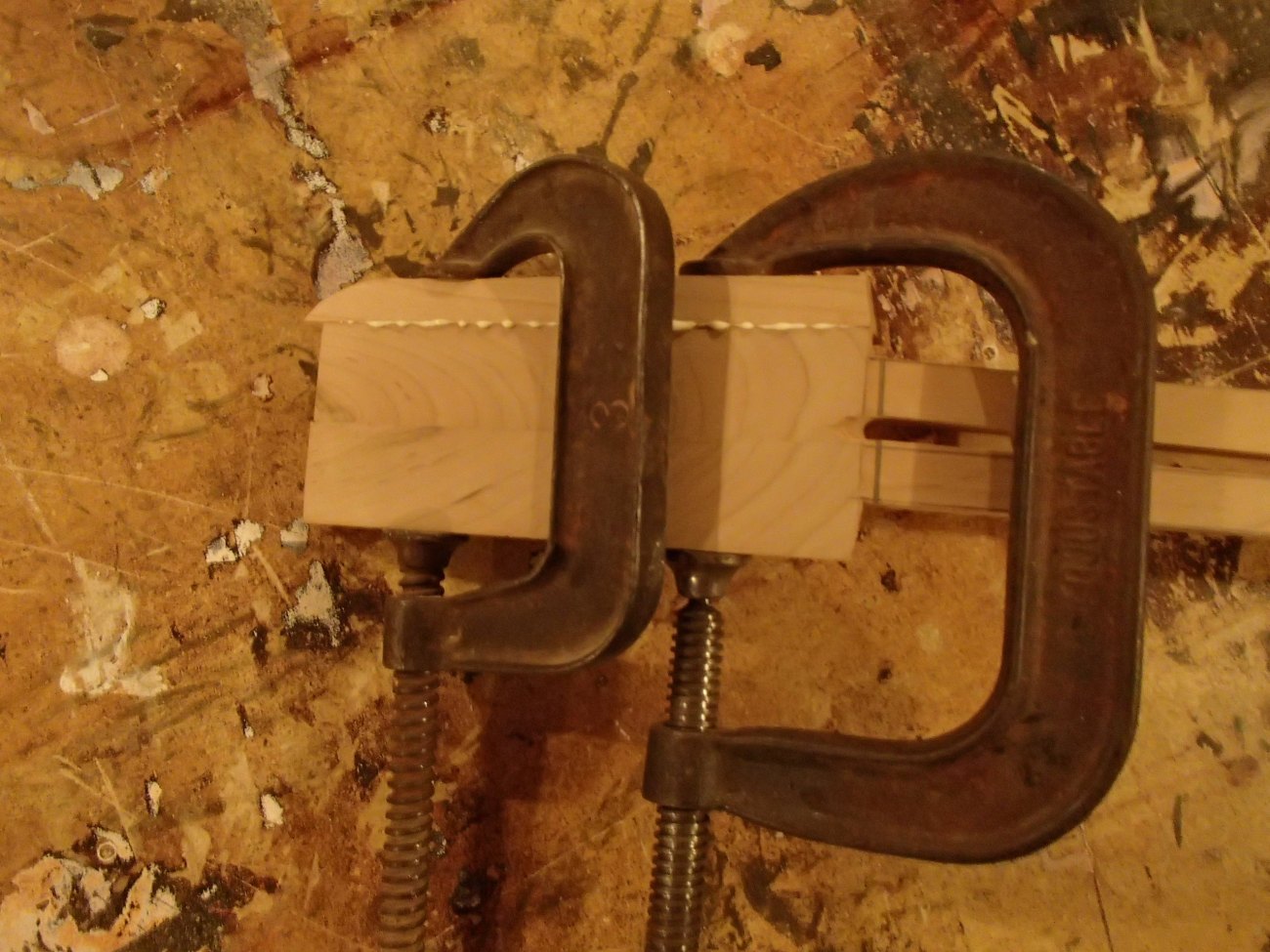 I went away for an hour and when I came back I got the rings of blocks down and took the clamps and tape off them and sanded them flat on both sides.  I use a regular 4×36 belt sander with a 50 grit sanding belt and revolve the rings hand over hand on top of the sander.  Once I can see that the whole surface has been sanded I do the other side. The dust collector is hooked up so the end of the hose is near the sander and most of the dust gets picked up. 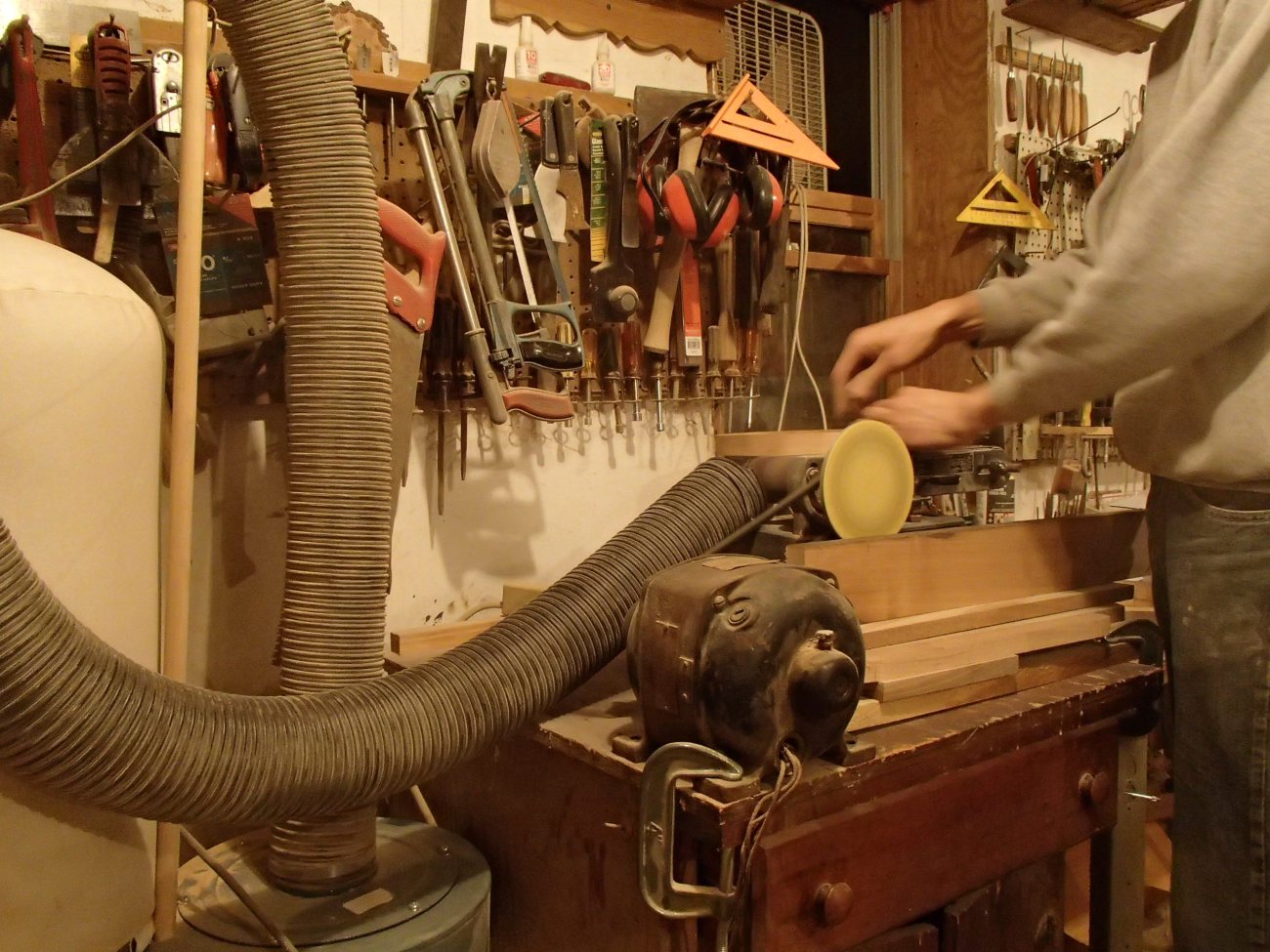 Once all of the rings were sanded on both sides I put glue on the top of the two bottom layers, then stacked them and put them in the vise lightly so I could adjust them against each other so that they were pretty well lined up.  Then I put handscrews on and tightened the vise and left it overnight.

Then I went back to the bandsaw and cut a slice off a piece of cherry burl and found a part of without too many voids that was big enough to make the peghead overlay.

I cut off the excess on three sides and sanded the nut end of the overlay to an angle so that it is perpendicular to the fretboard plane.  This will help hold the nut in place.

Then I glued the overlay onto the peghead.  The glue comes through the voids, so instead of using a caul to clamp it I just used a lot of small clamps so I could clean up some of the glue as it came through.

Then I did some minor vacuuming and putting away of things, and quit for the night.