I spent a couple of hours or so on getting this banjo assembled and set up.  My first step was to use a single edge razor blade like a scraper and run it around on all of the finished surfaces where it will work.  Then I used 400 grit sandpaper or #0000 steel wool on the other areas to make the finish feel smooth to the touch.  The razor blade is faster and does a nicer job but it only works on flat or convex surfaces.

I used a very small amount of mineral oil to rub down the surfaces with a bit of paper towel and went to the cabinet to find the hardware.

I have found that I am most efficient when I don’t keep picking up a tool and putting it down, so first I put all of the washers on the bolts, then I put all of the bolts in the holes, then I screwed all of the shoes on by hand and then used my ad hoc 5/16 nut driver to tighten them all.  I went over the whole tension hoop with 400 grit to makes sure it was smooth and ready to go, and began putting in hooks.  One down side of the Van Eps style hoop, at least the way I make it, is that all of the hooks have to go on at once before the tension hoop is finally positioned.  I put each hook in at about the angle shown in the picture and then rotate it down to point towards its shoe.  Getting all of the hooks through the holes in their shoes is a little fidgety but very feasible with practice. 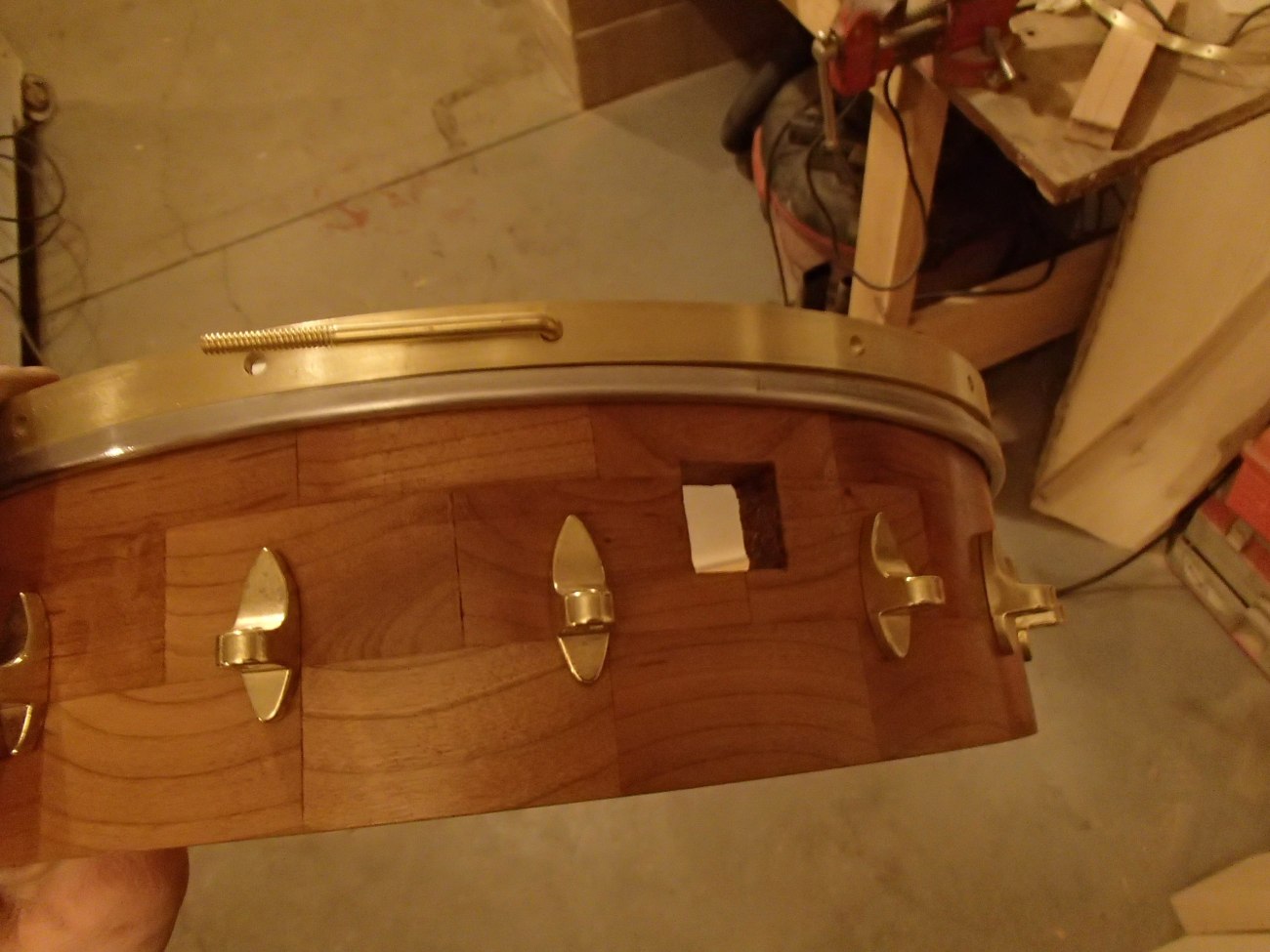 Once they’re all in their shoes it’s very easy to put the nuts on the hooks and tighten the head.

Here’s a close up of how the hooks fit in the hoop.  I could make larger holes which would make it easier to insert the hooks but I like the close fit,  it looks neater to my eye when assembled.

Once the pot was all put together I got started on the neck.  First I used the cello pin reamer to ream the holes out slightly for the Gotoh tuners.  It would be cheaper to buy a 10mm drill bit, but I already have a good 3/8″ bit and the reamer so they’re what I use.

Then I took the button and washer off the shaft of the 5th string tuner and put a small socket over the shaft.  I put a piece of paperboard in the vise to protect the finish on the neck and pressed the tuner into the 3/8″ hole.  It is very fast and easy. 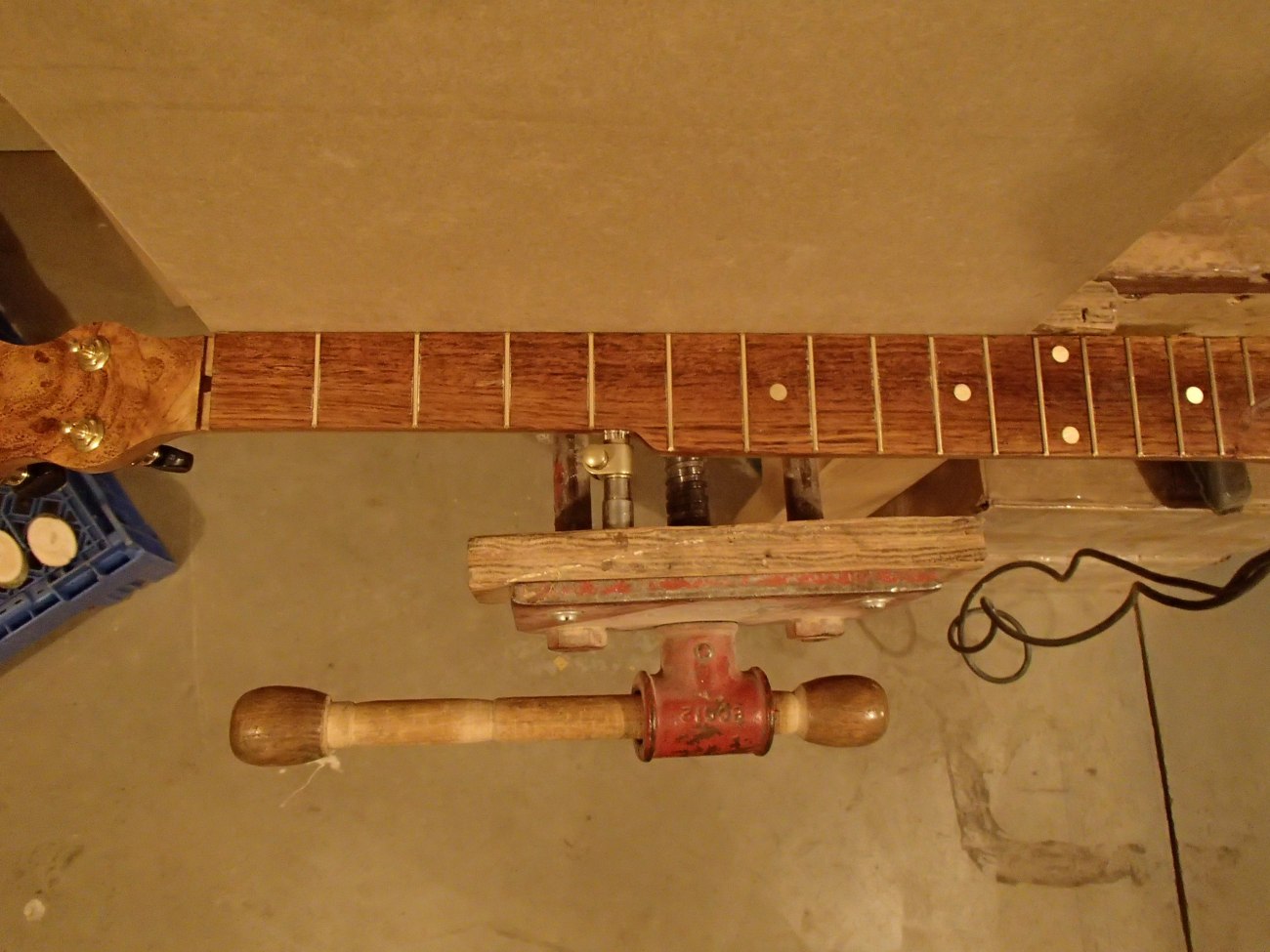 Then I made the nut out of a piece of Corian.  I buy it in small slabs and cut strips off them to make into nuts. I cut it on the bandsaw, or put it in the vise and cut with a hacksaw for very small cuts.  I shape it on the 1″ belt sander, make the slots with a triangular file and finish by coloring it black with a Sharpie marker.  The blackest Corian I could find is sort of speckled so I color it to match the tuner knobs.

Then I took my test bridge and the 3rd string and put them on to see what it looked like.

Then I popped the test bridge out and traced it onto a scrap of hard maple with suitable grain orientation.  I made the new bridge taller and cut it out and sanded it to shape.

Once I had the new bridge in hand I trimmed it a little at a time till the height looked good and then made new slots and put the strings all on.

Then I marked where I wanted the 5th string nut to be positioned to make the 5th string spacing from the 4th the same as the other string spacings at that point on the neck, drilled the hole, cut the nut from a small Corian dowel I made last winter as an experiment, shaped, slotted and colored the top and put it in the hole, and then put the string on it.

Today I took the banjo out in the loft by the big window after lunch when there is good light and took some pictures to show the whole thing now that it’s done. 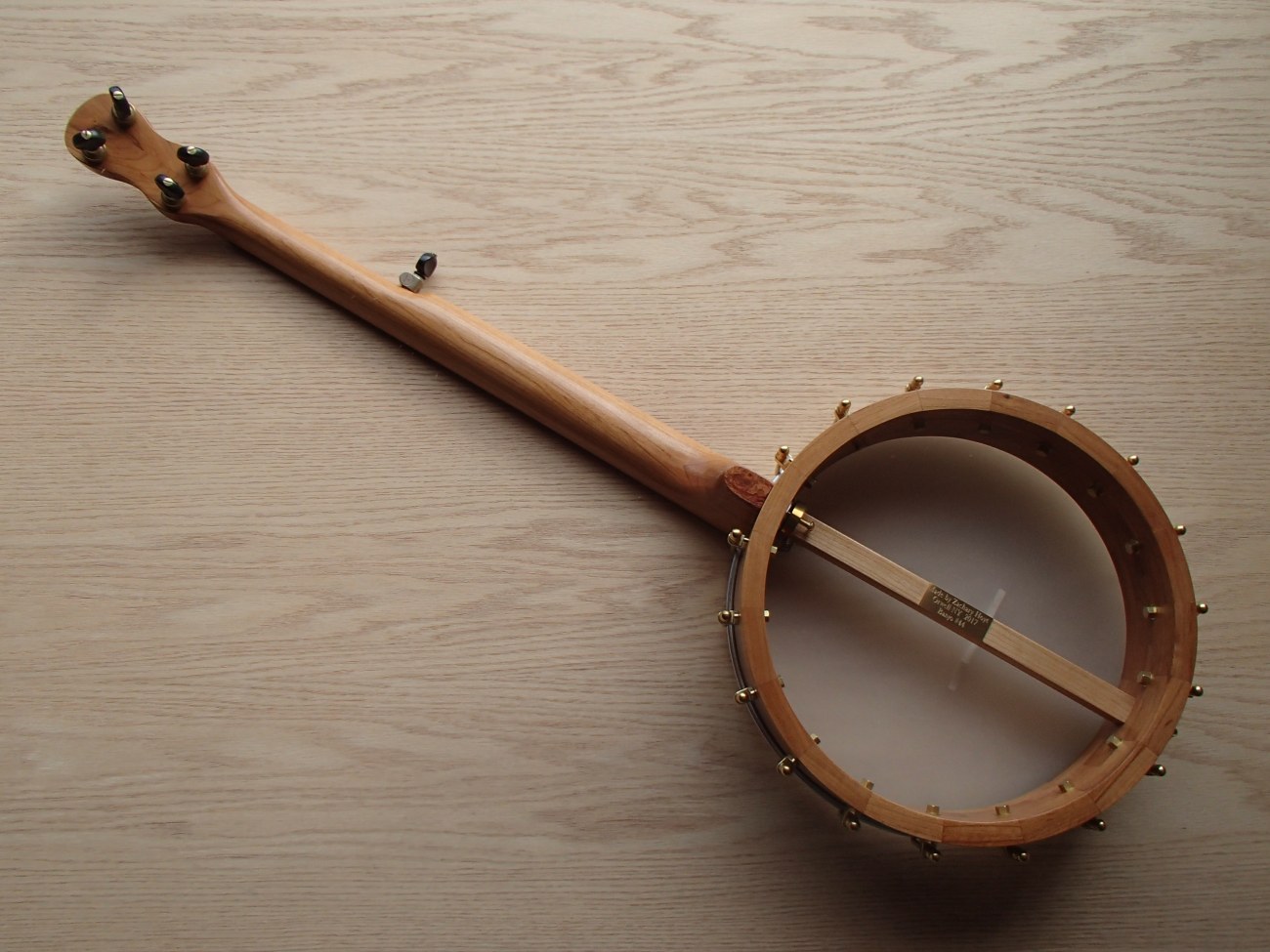 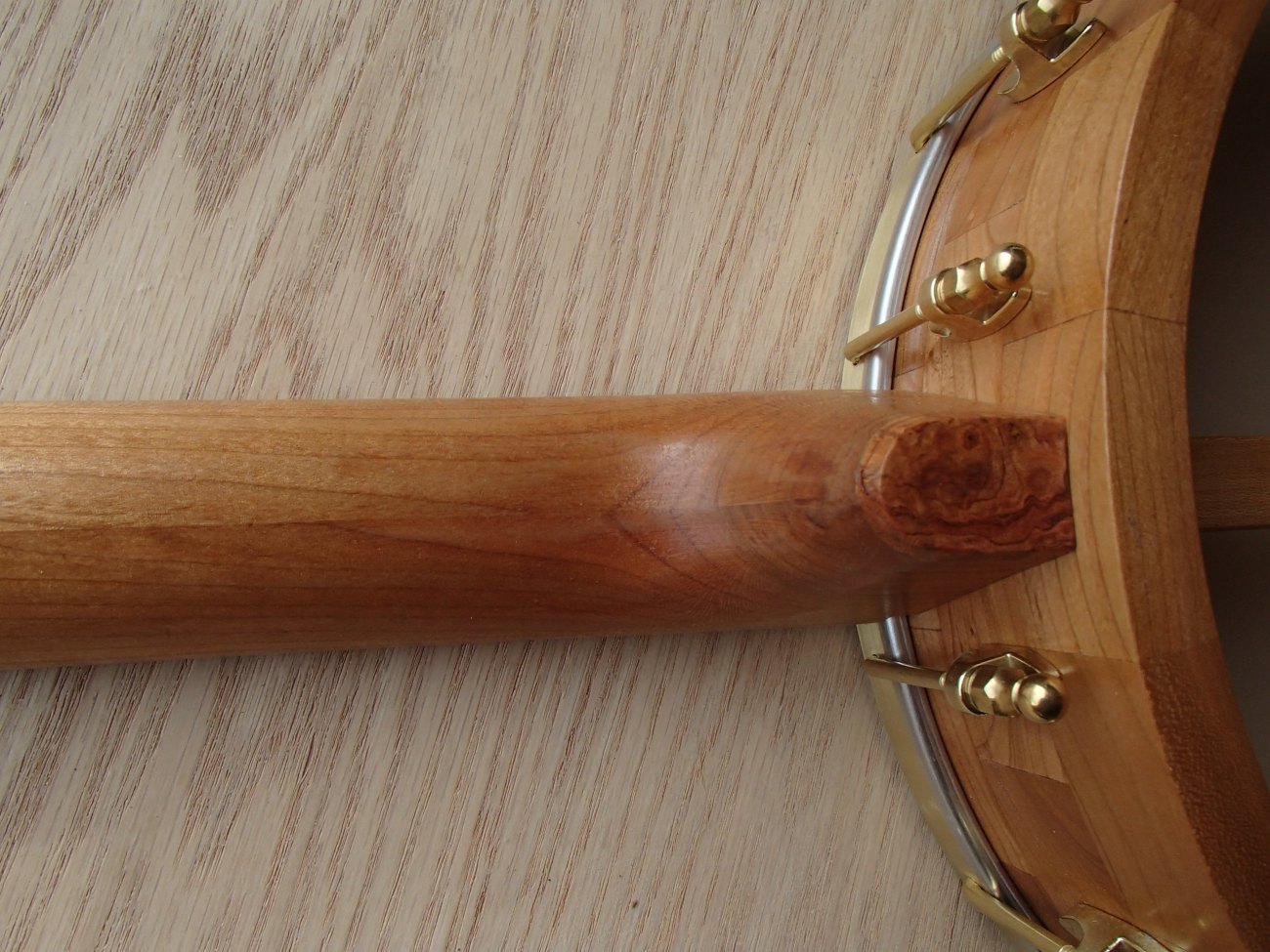 Here’s an odd thing I have noticed about this jatoba I have been using lately.  If I look at it from one end of a piece it looks medium reddish in color: 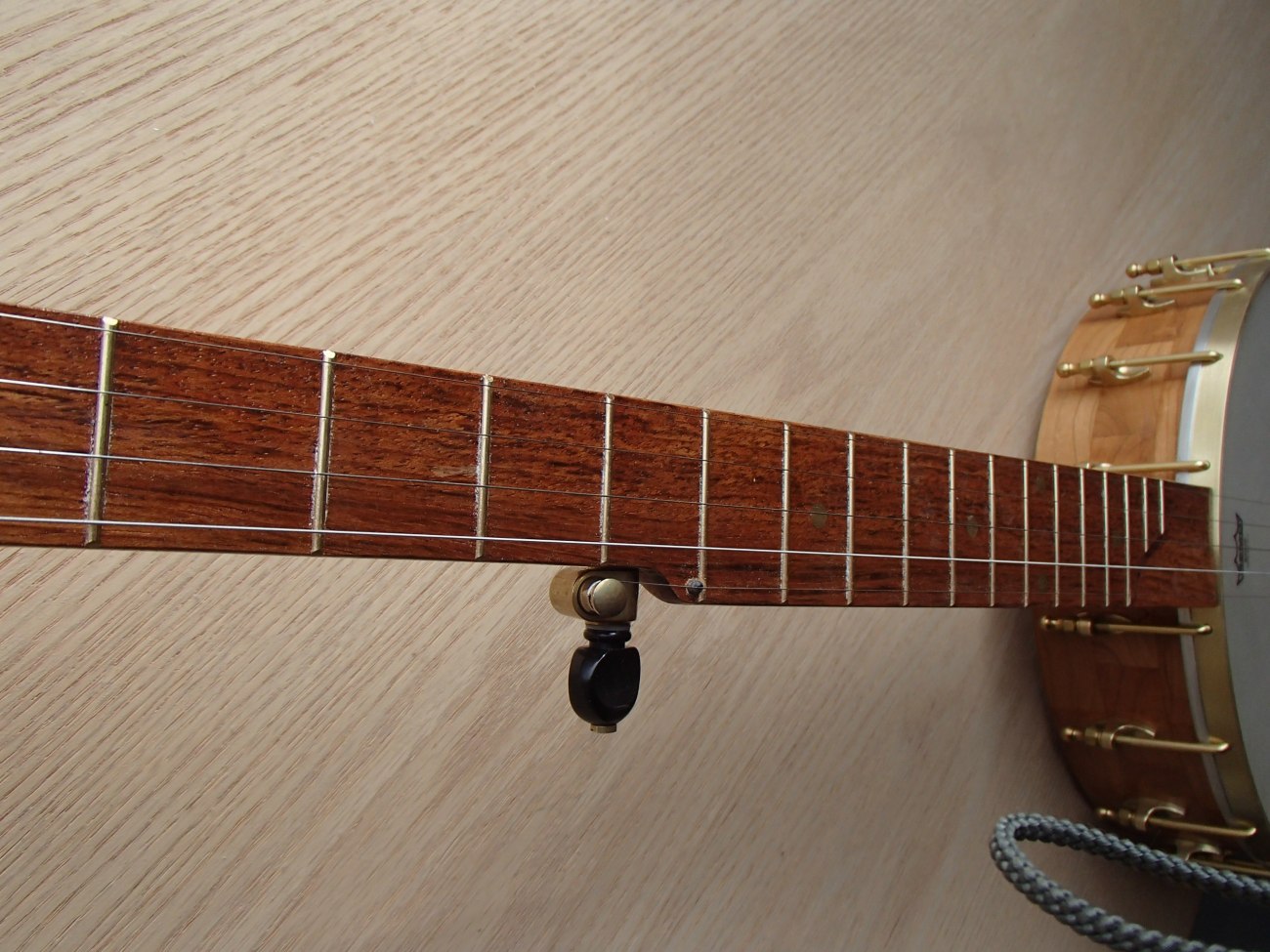 but if I look at it from the other end it looks more blackish in some areas.  I think there is a word for this but I don’t know what it is.

Here’s a link to a quick video clip of what it sounds like as of 12:45 today:

Early in January I was in touch with Brent from BHO about including this banjo in the BHO free drawing program, and he agreed to the idea.  I had been thinking of posting a banjo building thread for a while, and this seemed like the best banjo about which to do it.  I have not heard back yet from Eric about when it will be scheduled to appear, but I imagine it may be sometime in the not too distant future.