I made this banjo after thinking about a number of ideas that I wanted to try.  Over the course of a few weeks I came up with an idea in my head and when I had time and all of the materials I went ahead and put it together.  The first idea I had was that I wanted to try making a 5+1 banjo tuned gGDGBD, also sometimes called a lojo.  I was started down this rabbit hole by a custom neck request from someone who seemed interested and then disappeared after asking if I could make him one.  I was not familiar with the idea but it seemed interesting.  Then I thought it would be nice if it could be made to be also played as a guitar banjo.  This would enable me to use a set of 3 on plate right angle tuners from Stew-Mac that I had on hand, and would also make the banjo more versatile.  I thought about using a .008 string for the drone but decided I would rather try a tunneled string design instead, and I ordered some stainless steel micro-tubing from China on eBay which took about a month to arrive but was fairly economical.  I made the neck with a 12″ radius since it is so wide, and of course a bridge to match the curve. 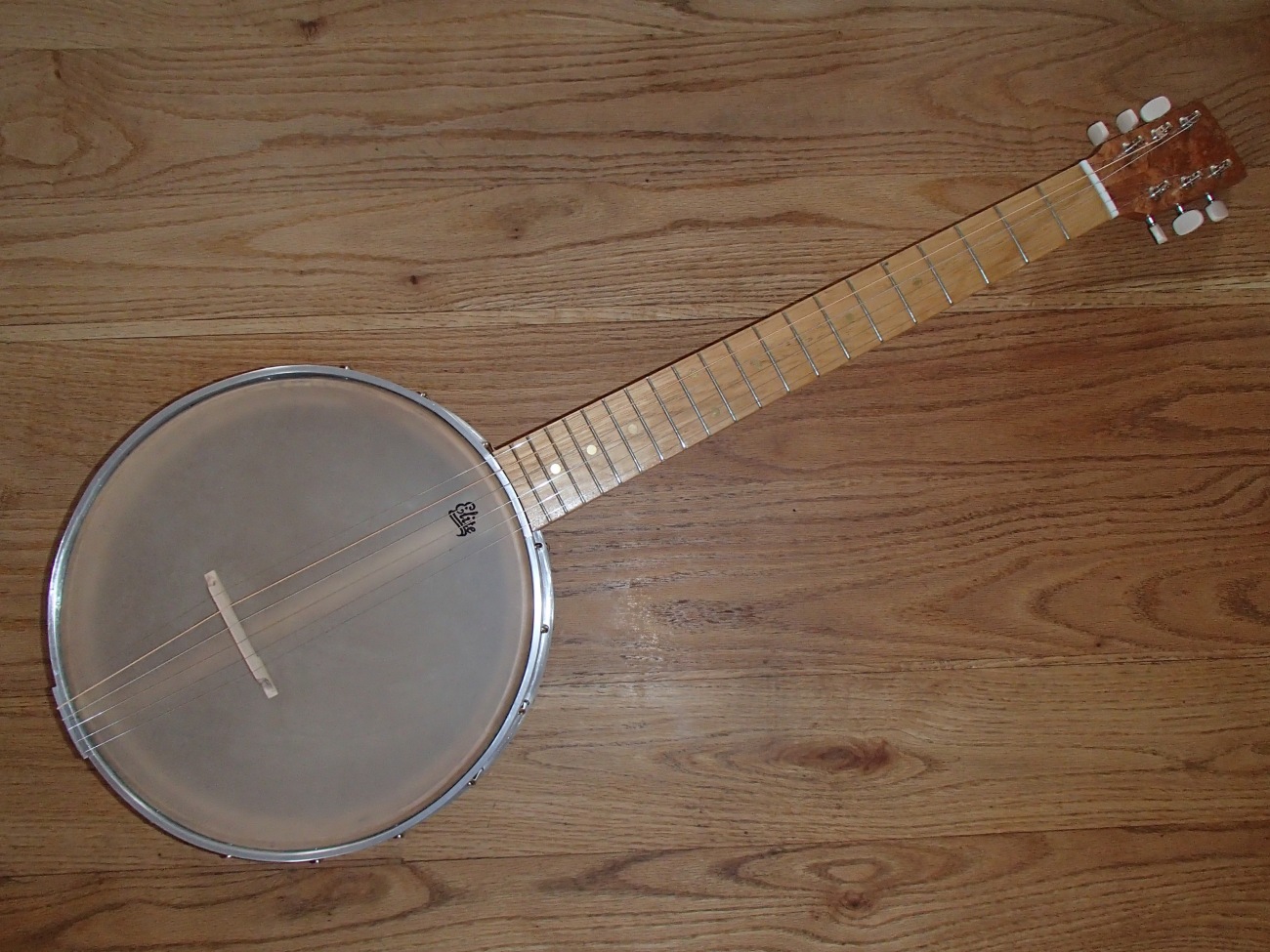 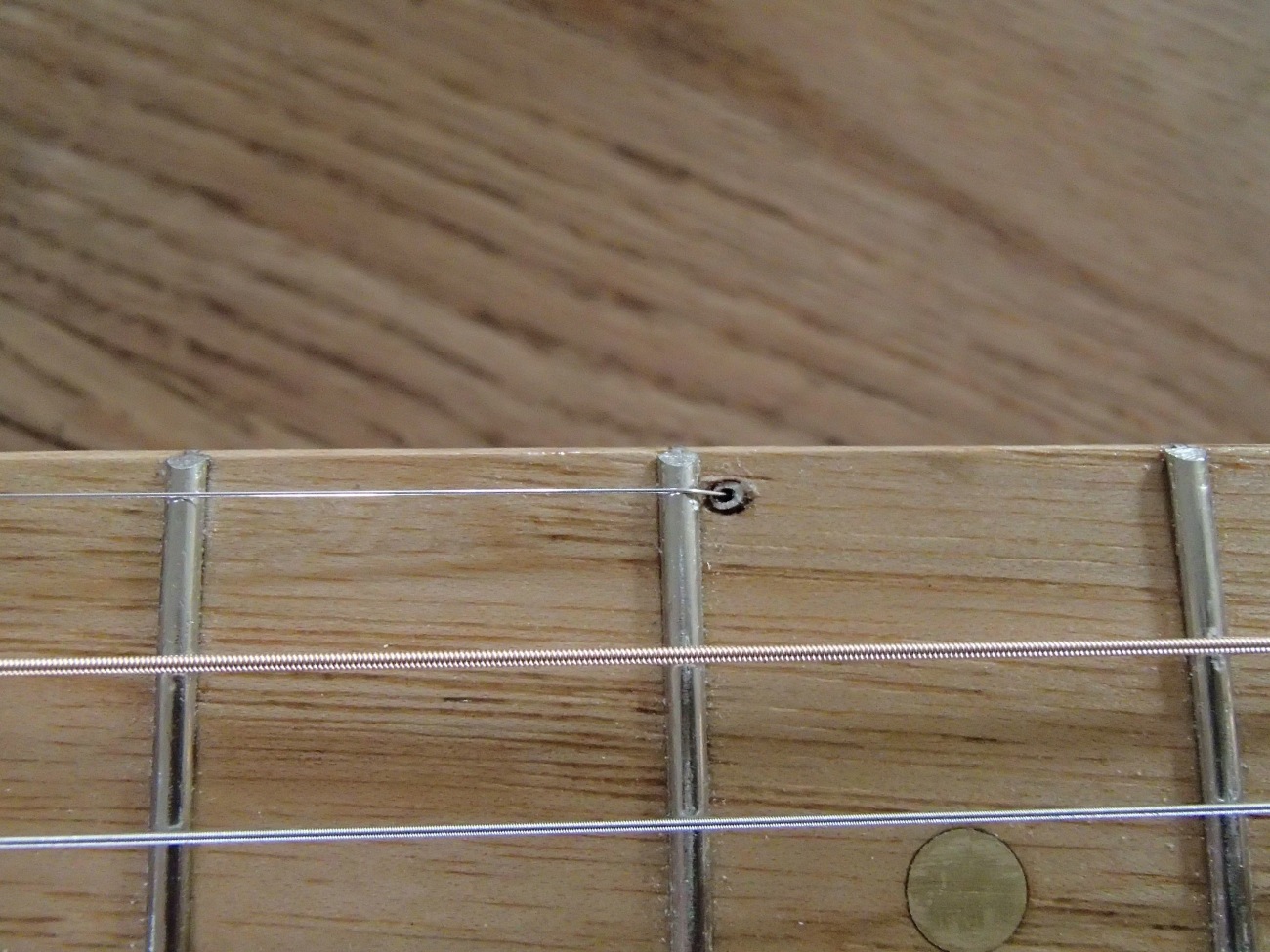 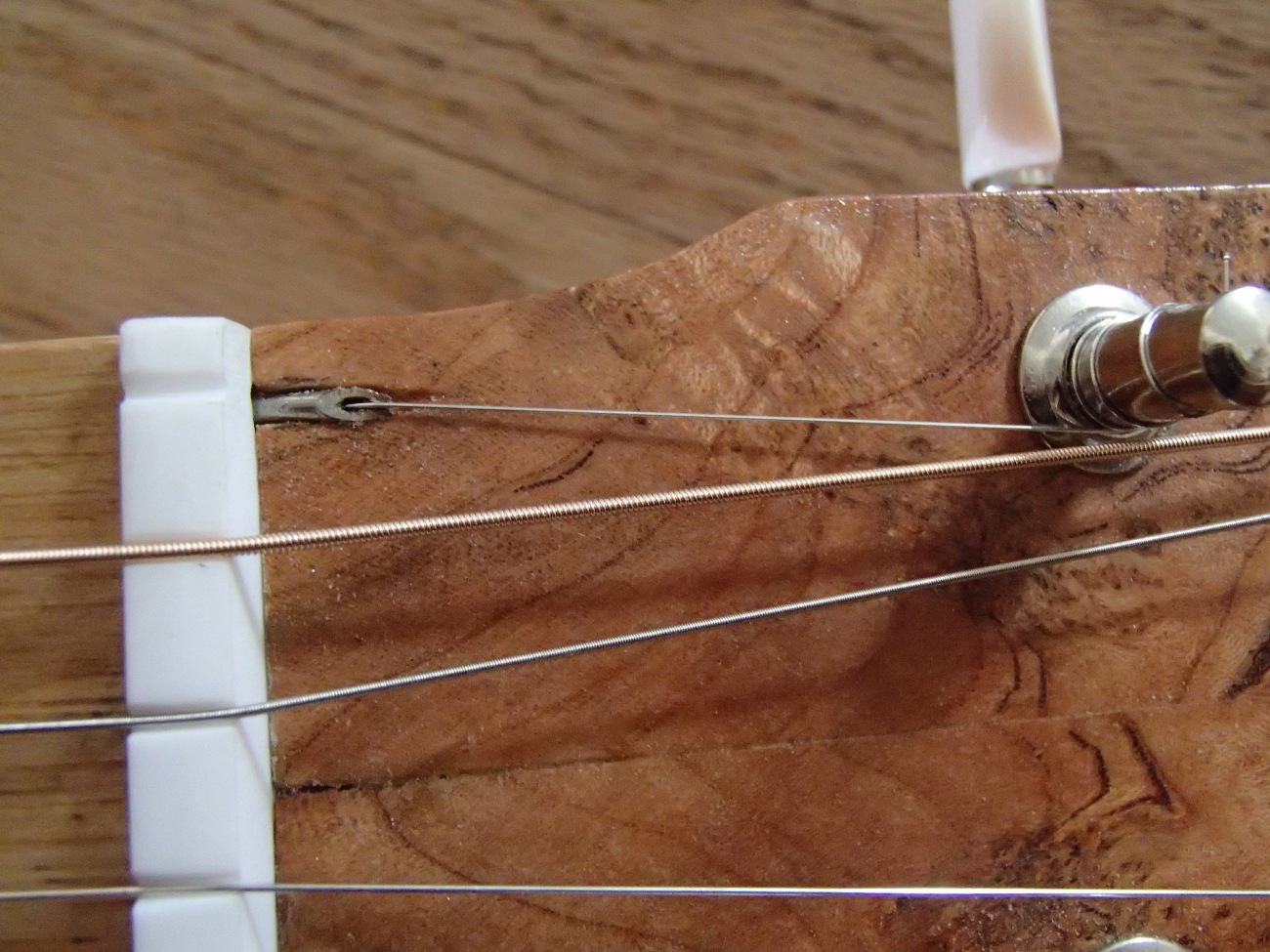 While waiting for the tubing I got started on the pot, which uses a piece of 6061 3/8″ aluminum rod as a flange.  The rod was cheap and easy enough to bend, but also easy to mar in the vise so I had to be careful.  I found out that I couldn’t use silver solder on aluminum so I began thinking about how to join the ends.  I don’t have welding skills so I thought about some mechanical options.  I ended up with the idea of cutting a slot in each end with the bandsaw and putting in a piece of 1/8″ x 1/2″ aluminum bar.  It then occurred to me that I would have an extra 1/8″ of bar sticking out that I would have to cut off, and I had a notion that I could perhaps make it into a tailpiece of sorts.  I have been thinking for a couple of years about making a banjo mandolin but the tailpiece was always the sticking point, and now I think I have a design that will work and can offer 8 separate nubs for the 8 strings.  I got most of the holes lined up when drilling the flange to match the tension hoop, but a few of them are slightly off kilter as you can see in the second photo.  I also had to put a slight bend in the hooks to make the nuts parallel with the rim.  Another time I will make a slightly wider ledge for the flange to rest on, which will move the hooks and nuts out slightly away from the sides of the pot till they’re parallel.  I made the bottom of the rim round to visually match the shape of the flange. 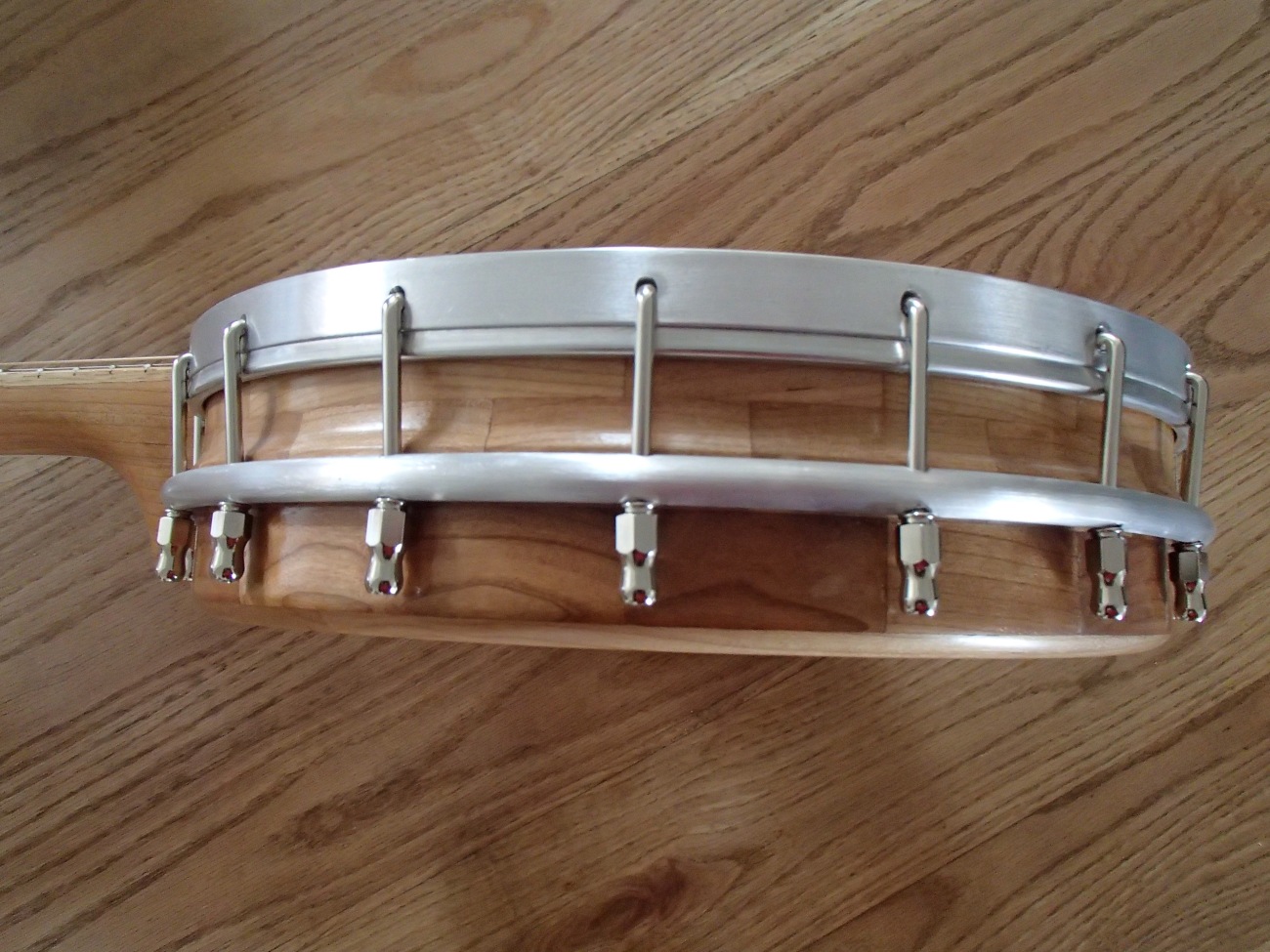 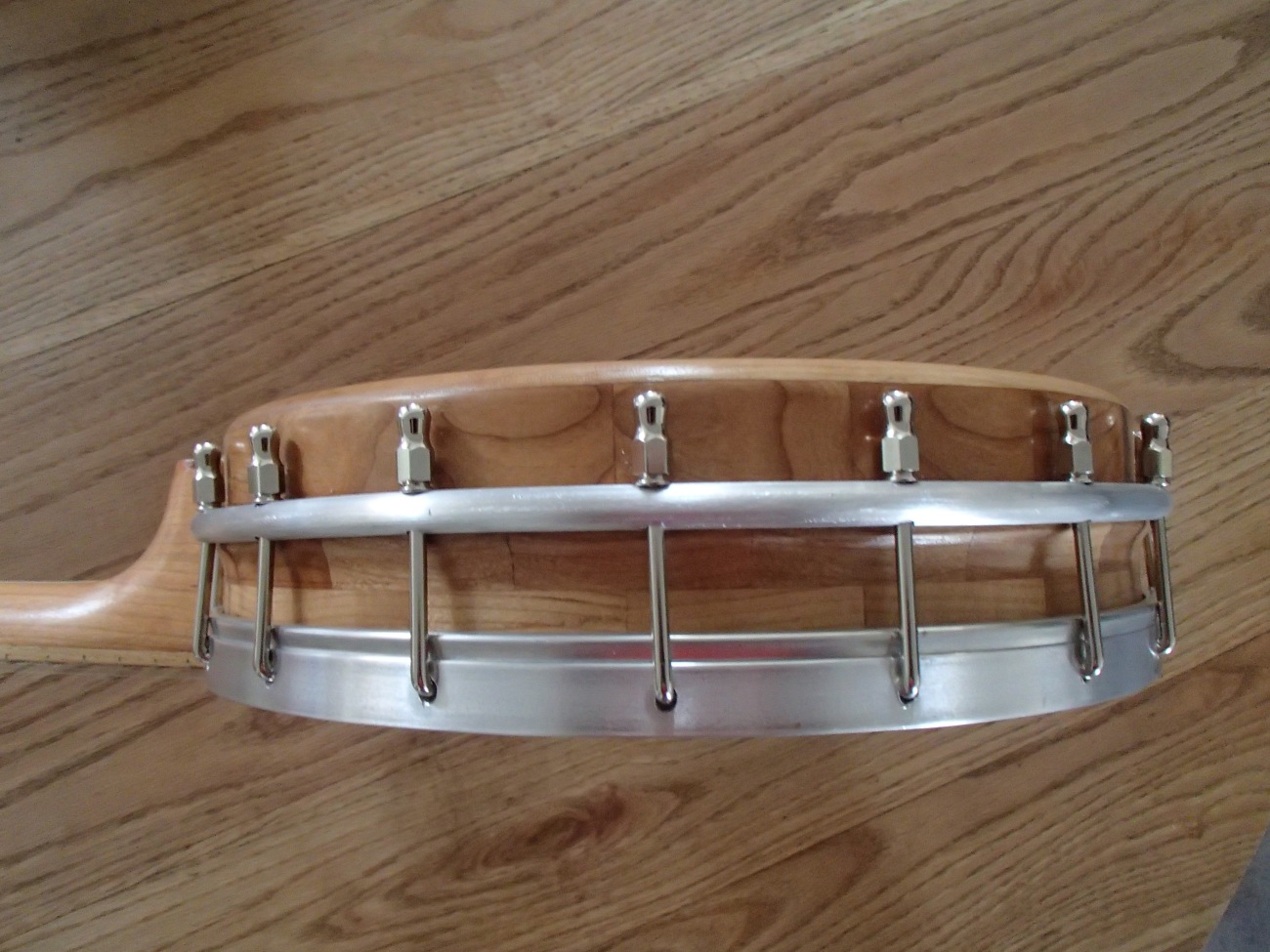 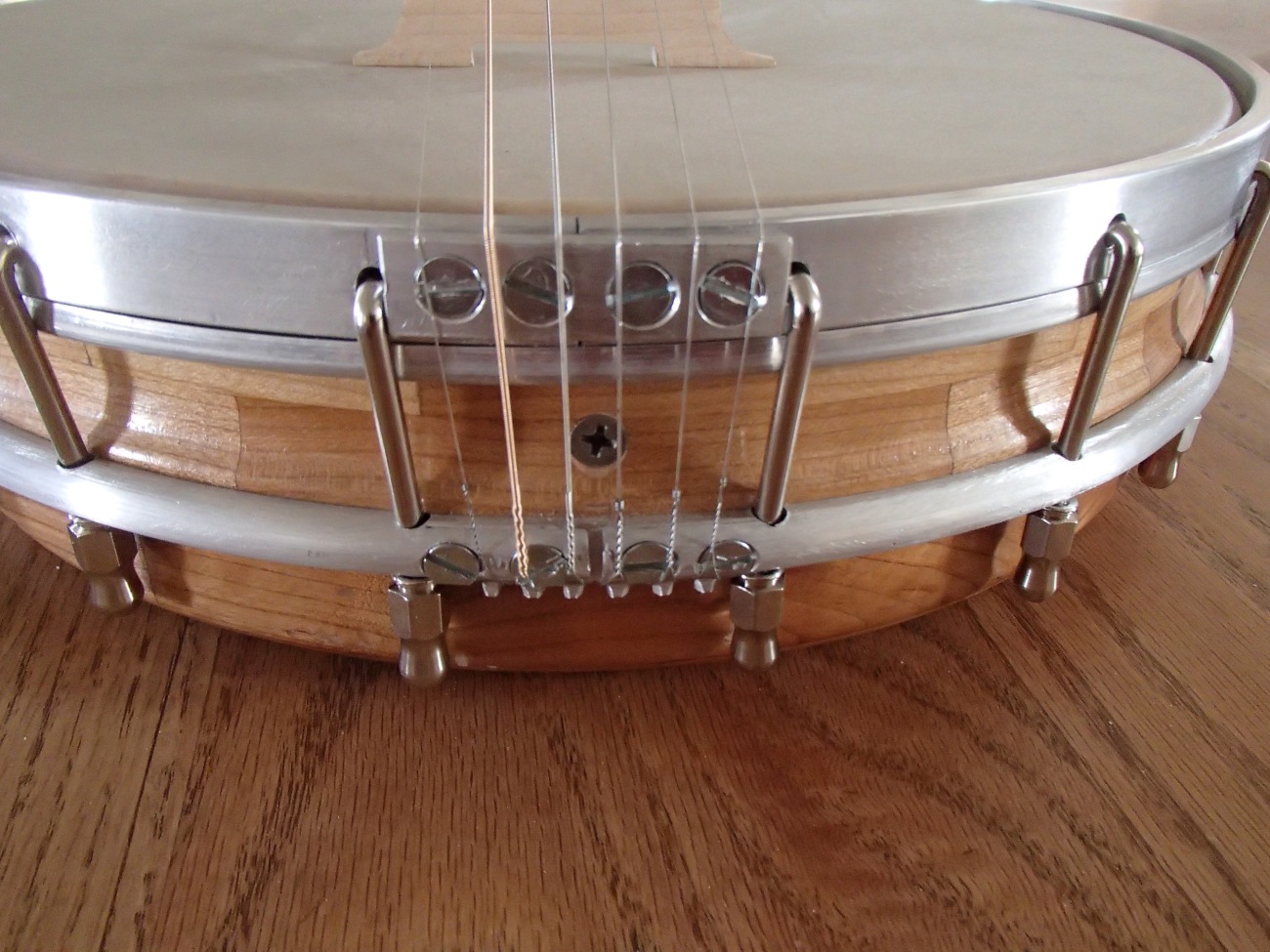 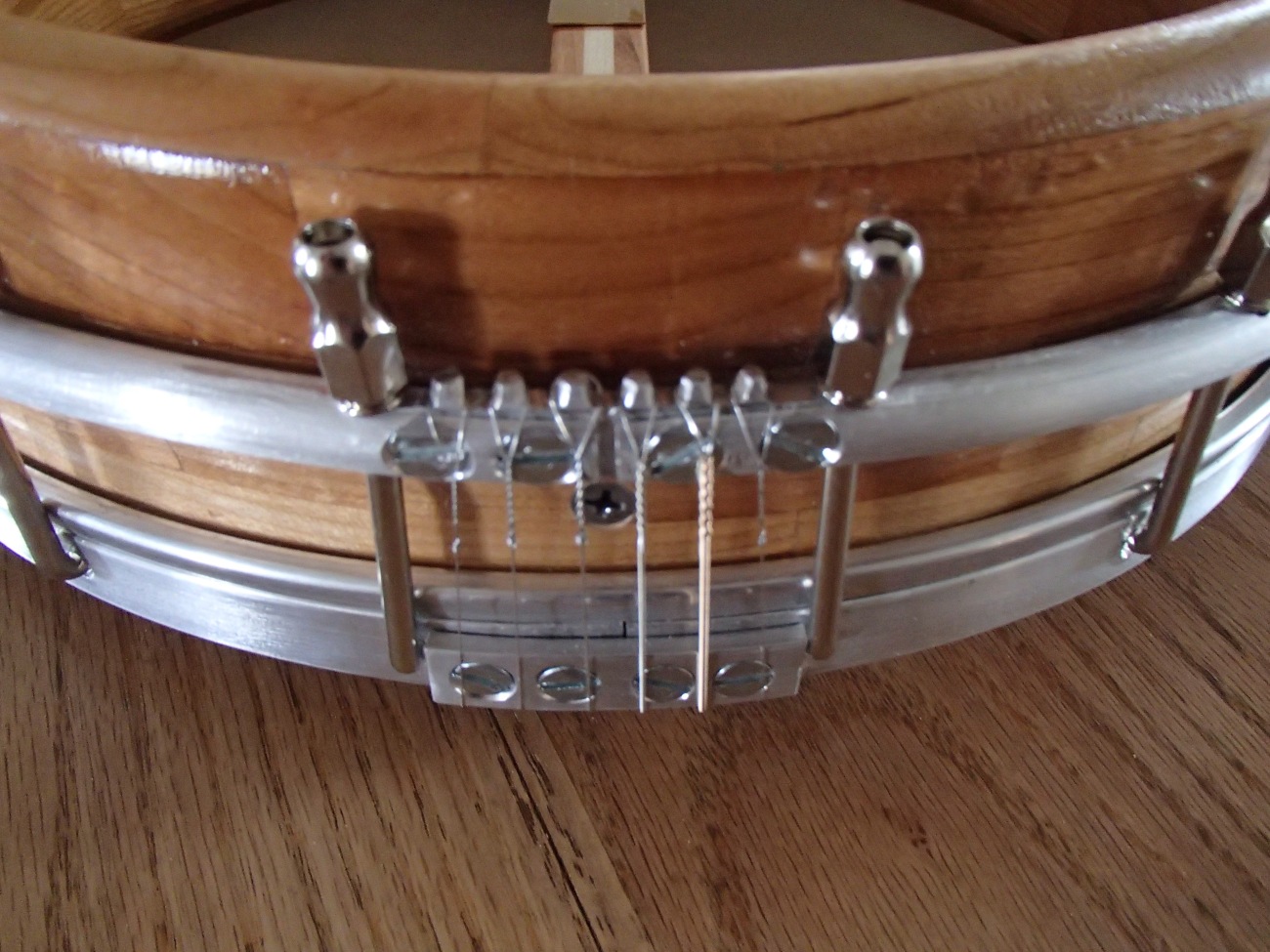 I also wanted to try making my own dowel stick yoke out of aluminum, and I had a big enough piece of 6061 on hand to try it.  I got some advice about that as well as about the flange on BanjoHangout.  I thought it might be hard to cut the heel of the neck to fit over the flange but it wasn’t too bad. I used a 1/2″ forstner bit coming in from each side, and then cut out the rest by hand with knives and chisels. 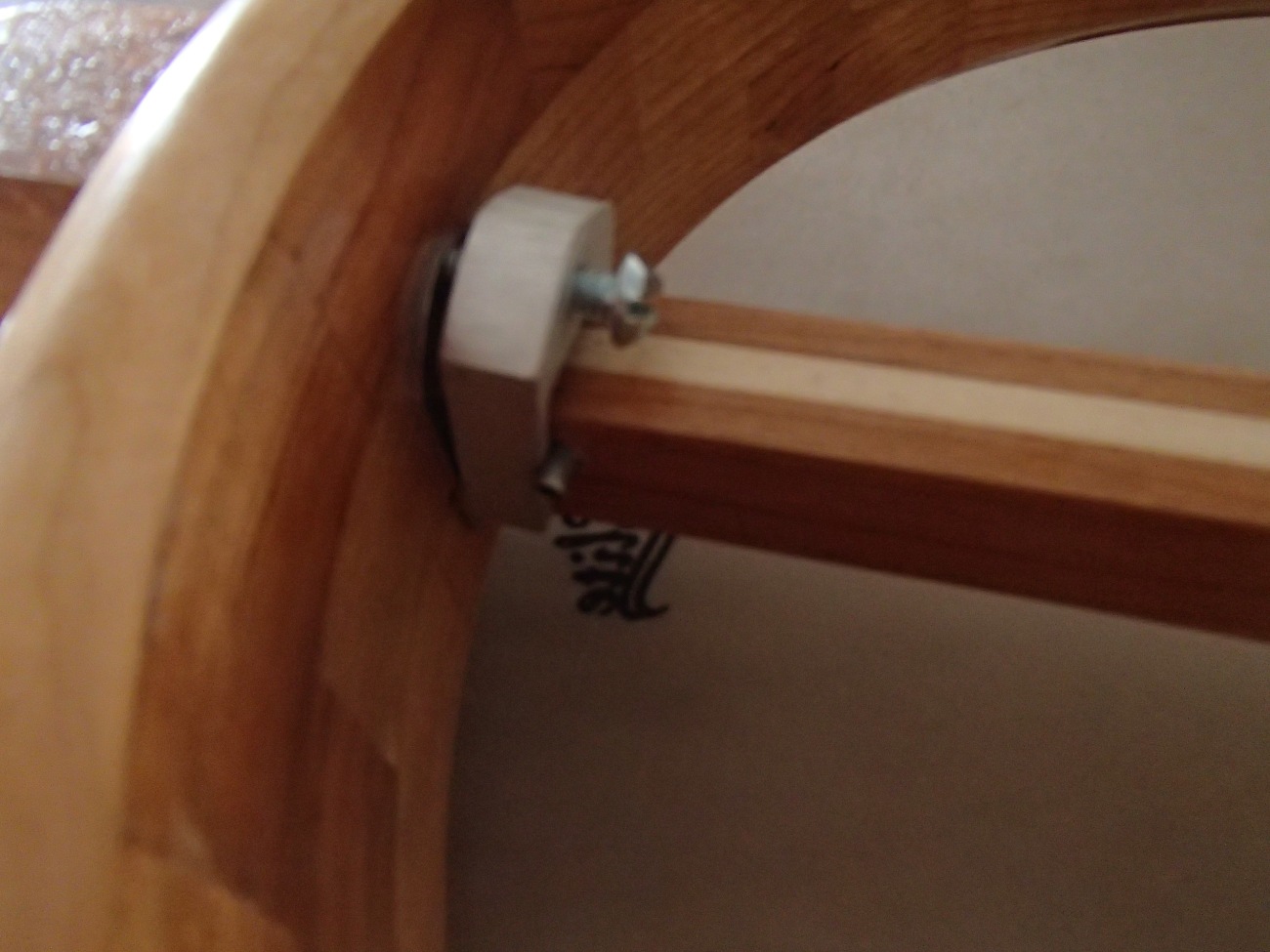 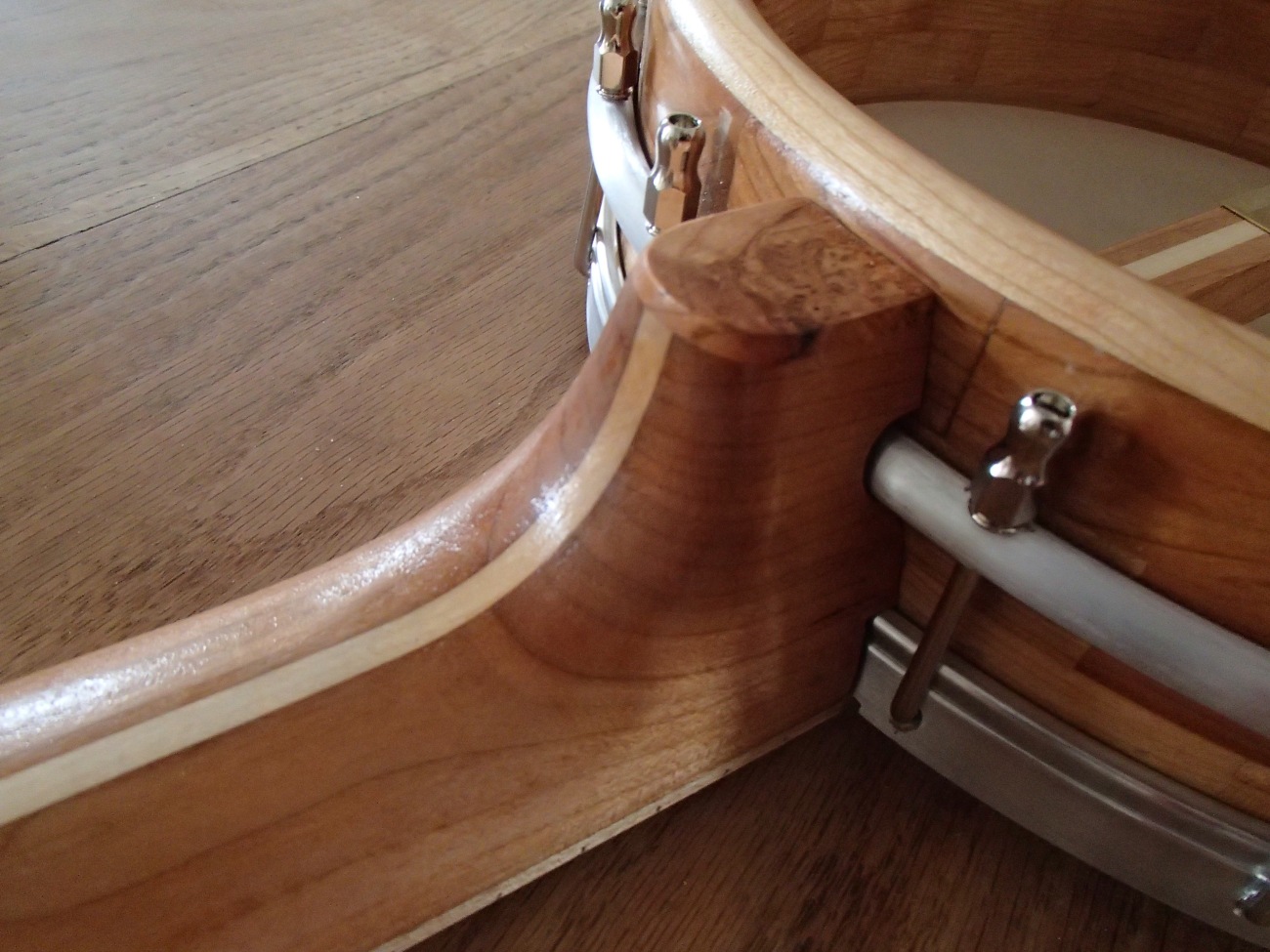 Here are a few pictures of when I first set it up, as a guitar banjo tuned EADGBE.  I used a set of medium banjo strings minus the 5th, with a .036″ for the A and a .046″ for the low E.  I got the odd loop end strings from Elderly for around $1.20 a piece as I recall, and they were nice and long. 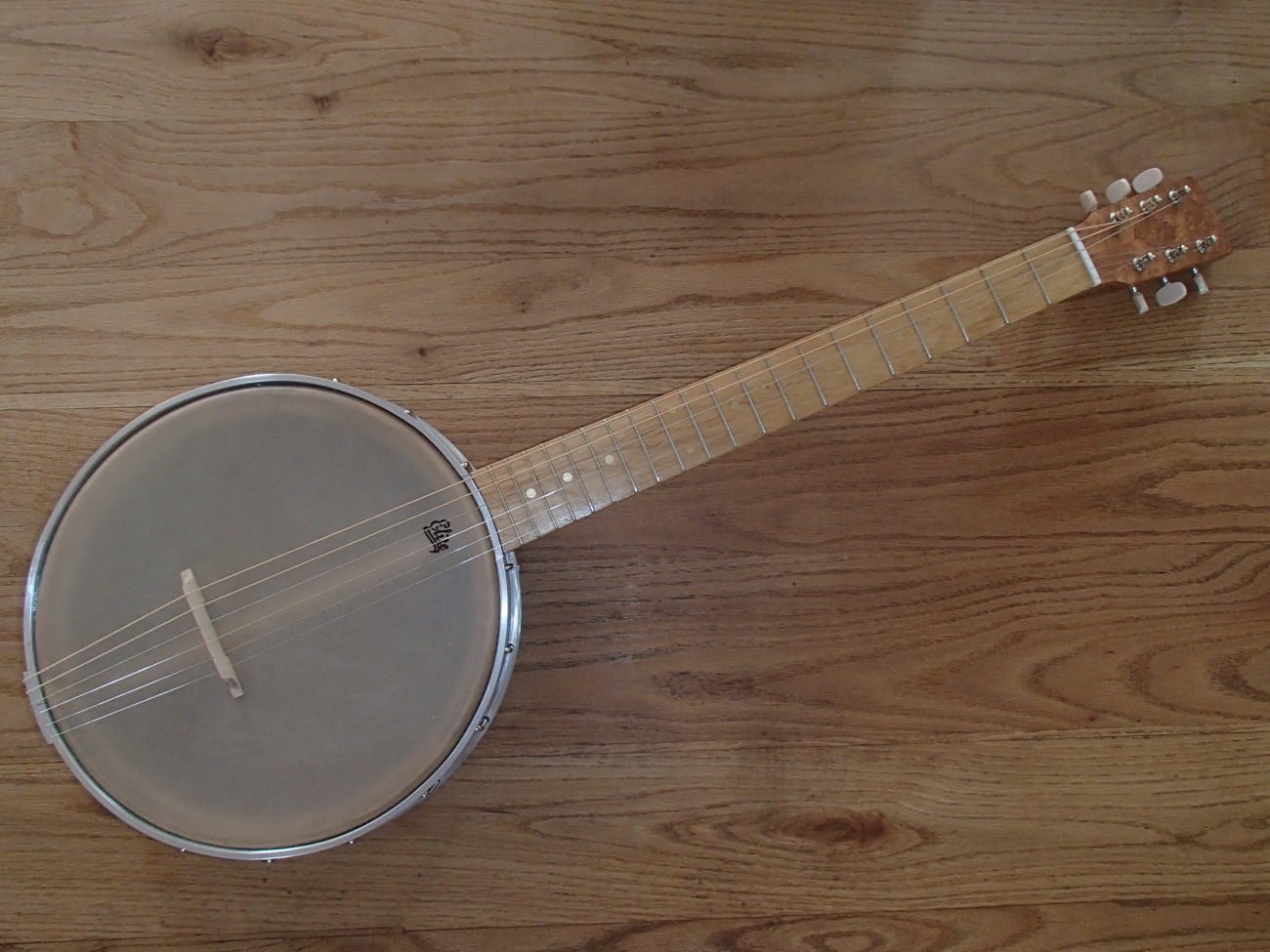 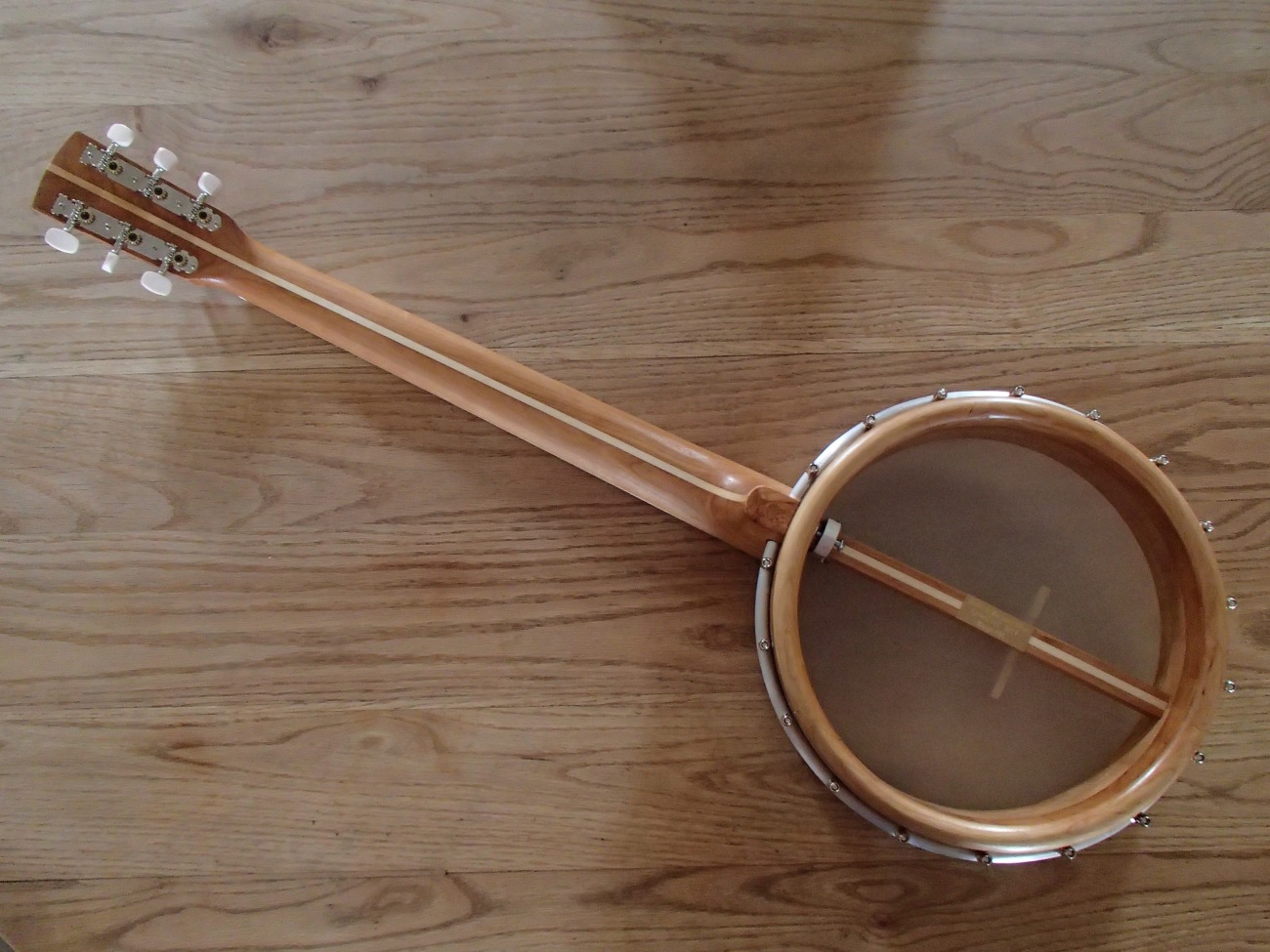 The assembled banjo weighs 4 pounds 15 ounces, which is a bit lighter than I had expected.   I guess the aluminum must be the main reason for that.  I like the sound pretty well and I’ll have to get used to how to use the low string effectively.  To see a couple of video demonstrations please follow the links below: